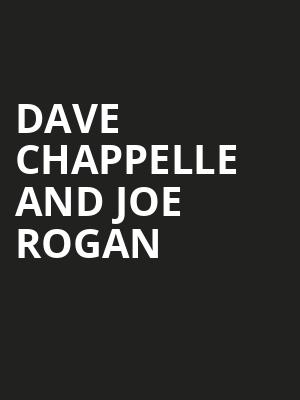 Two of contemporary comedy's most popular, and often the most controversial, comics are joining forces and hitting the road this spring! The no-holds-barred humor of Dave Chapelle and Joe Rogan collides as the pair bring their irreverence to select cities across North America. A not-to-be-missed live comedy event!

Multi-talented comedian Rogan brings a unique perspective to his outspoken brand of stand-up, thanks to his background as a mixed martial arts fanatic (and former Ultimate Fighting Championship commentator) and current host of the ever-popular podcast and free-thinking platform The Joe Rogan Experience. Similarly speaking his mind and tearing apart American culture with hilarious results, Dave Chapelle rose to fame via his sketch comedy show and continues to push boundaries with critically acclaimed comedy specials today.

Sound good to you? Share this page on social media and let your friends know about Dave Chappelle and Joe Rogan at Smoothie King Center.