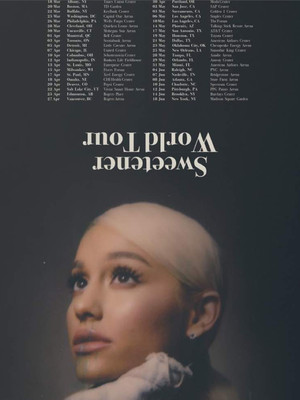 She may be a pint-sized pop princess but don't for a second doubt if Ariana Grande packs a punch! Dangerous Woman was one of the biggest albums of the year, and her follow-up Sweetener has only brought more of the same! A huge step up from her early album My Everything, Sweetener is a mature effort from the young star, featuring a bunch of starry collaborators and countless hits, such as the sultry track 'God Is A Woman'. 2019 sees Ariana dominating the charts with her latest album release 'thank u, next', which features No.1 singles 'break up with your girlfriend, i'm bored.', '7 rings' and 'thank u, next'.

Ms. Grande started out her showbiz career singing as an entertainer before earning a role on the Nickelodeon's TV show Victorious. When that ended, she starred in the spin-off show Sam & Cat, slowly cultivating her stage persona alongside the TV show until mid 2014 when the show was cancelled and she was able to unleash the new-look Ariana Grande (and THOSE knee-high boots!) along with her second album. Catch Ariana when she takes on a stadium near you soon!

A Happy Father: “Show was great”

I will start this off with I’m not an Ariana fan. I’ve seen the earlier... more

I had an amazing experience. I was at the front row, and during her song... more

Sound good to you? Share this page on social media and let your friends know about Ariana Grande at Smoothie King Center.