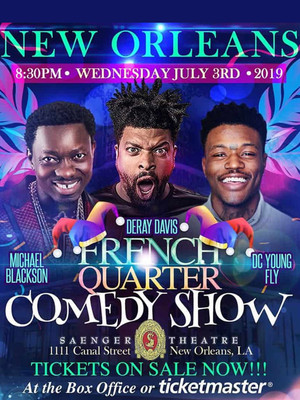 Five comedians kick off the July Fourth weekend in style!

Kickstart your Fourth of July weekend with an extra special night of comedy at Nola's Saenger Theatre! Presided over by Chicago funnyman DeRay Davis, the hotly anticipated stand up spectacular also features the likes of Micheal Blackson, DC Youngfly, B. Simone and Just Nesh - who'll be bringing belly laughs big enough to keep you feeling content well into your Independence Day celebrations.

A native of Chicago's south side, Davis honed his comedy chops in the city's clubs before moving Los Angeles, where he won the Comedy Central Laugh Riots Competition and subsequently appeared as support on a tour with Cedric the Entertainer. It wasn't long before he landed roles on the silver screen, working with the likes of Taraji P. Henson on Empire and as the host of Ice Cube's Hip Hop Squares on VH1.

Sound good to you? Share this page on social media and let your friends know about French Quarter Comedy Fest at Saenger Theatre.