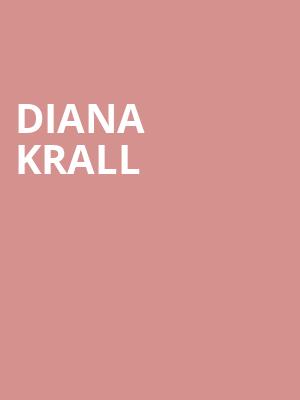 The multi-talented musician tours in support of her brand new album, Turn Up The Quiet

This dream of... Diana Krall!

Canadian jazz starlet Diana Krall embarks on a 34-date American tour in support of her new record, This Dream Of You. The album marks the 16th studio release for the singer-songwriter, who has sold over six million albums since she released her first over 30 years ago in the early 1990s. Today, Diana balances her music career with her family life - she is married to British musician Elvis Costello and the couple have twin boys. Fun fact... they got married on Elton John's lavish estate outside London!

With her pre-bop piano style, cool and sensual singing, and gorgeously photogenic looks, Krall took the jazz world by storm in the late 1990s with the release of her first studio album, Stepping Out, in 1993. Her third album, All for You: A Dedication to the Nat King Cole Trio (1996), helped show off her singer-pianist roots and earned her a Grammy nomination and several prime Billboard positions, cementing her name as one of top popular Jazz artists around.

Born into a musical family, Diana Krall began learning to play the piano at the tender age of four and performed with a jazz group during her High School years, as well as performing solo at local restaurants. Her perseverance paid off - upon graduating high school, she was awarded a Scholarship to study music at the esteemed Berklee College of Music. Her time there was beneficial in more ways than one, for it was only some encouragement from one of her music teachers that she began taking her singing more seriously!

Suitable for audiences of all ages

Her voice, and piano playing, combined with an excellent band was simply... more

Sound good to you? Share this page on social media and let your friends know about Diana Krall at Saenger Theatre.