Sorry! You missed Kero Kero Bonito at The Republic 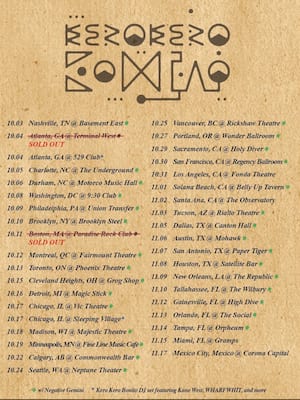 I've been following this band for nearly half a full decade of my own human life, and I've never heard them sound so good.

The Line of Best Fit

Kero Kero Bonito head on tour across US and Canada

British electro-indie-pop band Kero Kero Bonito are back in the states this fall, with a massive six-week tour across the US and Canada. Following on from the group's downtempo new single 'When The Fires Come', the tour kicks off in Nashville on October 3rd and runs until November 15th in Miami, including stops in Washington DC, Chicago, Austin, San Francisco and LA.

Taking America by storm over the past few years, Kero Kero Bonito's unique sound and aesthetic has been described by Pitchfork as "synthpop so effervescent it felt like the sonic embodiment of watermelon Pop Rocks". Their most recent album hit number 1 on the Billboard Heatseekers Chart and their exciting and colourful live show has seen them sell out shows across the globe, so grab your tickets before they're gone!

Sound good to you? Share this page on social media and let your friends know about Kero Kero Bonito at The Republic.