Sorry! You missed Overkill at House of Blues 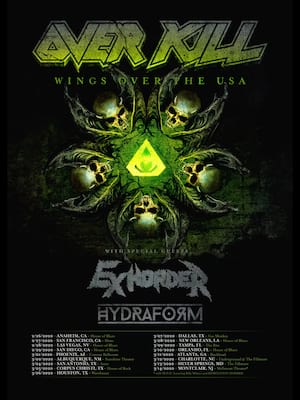 ...what a welcome feeling it is to receive yet another consistent offer from Overkill, the skull-crushing, neck-wrecking The Wings of War.

The Wings Over The USA Tour

Bursting out of their home city of New Jersey with a vengeance upon forming in 1980, thrash metal pioneers Overkill rose to prominence as one of the genre's foremost acts, alongside the likes of Anthrax and Metallica. Crafting a reputation for a lightning speed and jaw-dropping technique, the prolific band has remained successful thanks to their versatile experiments with doom, industrial and stoner metal.

Supporting the 2019 release of their 19th studio album The Wings Of War, Overkill hit the road on the Wings Over The USA Tour, bringing along Florida thrashers Exhorder and Denver progressive hard rockers Hydraform. Rallying their diehard fan base with a dedication to constant touring and releasing, the outfit also put on one high octane show, merging skill and bone-shaking anthems whilst eliciting stormy mosh pits and much head banging.

Seen Overkill? Loved it? Hated it?

Sound good to you? Share this page on social media and let your friends know about Overkill at House of Blues.