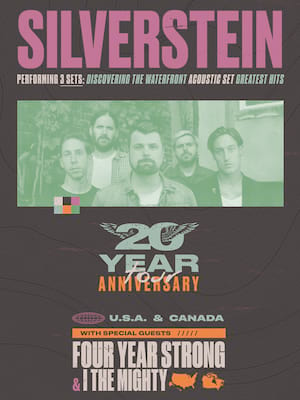 Each member beams ear to ear and soaks up the energy from the crowd, only to continuously give it back at ten times the velocity.

Silverstein commemorate 20 years in the industry

Canadian rockers Silverstein embark on a massive anniversary tour commemorating 20 years of making music together. Formed in 2000, the band have toured the world over and have nine albums to their name with their latest 'Redux: The First Ten Years' released early 2019. Californian rock band I the Mighty and pop band Four Year Strong will be joining on select dates throughout the tour.

Redux: The First Ten Years celebrates the band's first 10 years making music by re-recording 12 songs from their early music days in the 2000s. Music blog Dead Press described the album as showing "the strength of Silverstein, how far they've come, and how much their work is able to stand the test of time."

Seen Silverstein? Loved it? Hated it?

Sound good to you? Share this page on social media and let your friends know about Silverstein at The Civic Theatre.